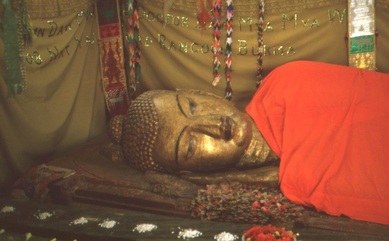 Parinirvana Buddha Figure At Kushinagar, India
The following are the last verses of The Sutra Of Bequeathed Teachings, a Sutra that deals with the final hours and teachings of the Buddha.

"World Honored One! Everyone here is without doubts regarding the Four Noble Truths. In this assembly there are those who have not yet accomplished their task. When they see the passing of the Buddha they will be grieved. But even those who have just entered the teaching will attain Awakening when they hear the Buddha’s words, just as in the dark of night a flash of lightning illuminates the road. If there are those who have already accomplished their task and crossed the sea of suffering they will only have this thought: 'How swift is the passing of the World Honored One'!  When Aniruddha spoke these words everyone in the assembly clearly understood the meaning of the Four Noble Truths. But the World Honored One, wishing that all in this great assembly might become stronger, spoke further with a mind of great compassion.

Oh monks! Do not grieve! Even if I were to live in the world for as long as a kalpa our coming together would have to end. There can be no coming together without parting. The teaching, which benefits both self and other, has reached completion. Even if I were to live longer there would be nothing to add to it. Those who were to be Awakened, whether in the heavens or among human beings, have all been Awakened. Those who have not yet been Awakened all possess the conditions for attaining Awakening. If all of my disciples practice the teaching from now on through generation after generation the Dharma Body of the Tathagata will exist forever and will not be destroyed.

Therefore you should know that all things in the world are impermanent; coming together inevitably means parting. Do not be troubled, for this is the nature of life. Diligently practice right effort; you must seek liberation immediately! With the light of wisdom destroy the darkness of ignorance. Nothing is secure. Everything in this life is precarious.

Now I attain Parinirvana. It is like getting rid of a bad illness. This thing that we should not cling to is what we call the body. It is drowned in the sea of birth, old age, sickness, and death. How could there be a wise one who would not rejoice at being liberated from it?

Oh monks! You should always wholeheartedly seek the way of liberation. All things in the world, whether moving or motionless, are characterized by disappearance and instability. Stop now! Do not speak! Time is passing. I am about to cross over. This is my final teaching."